Trixie Mattel has no fan demographic. As a folk singer-songwriter, she appeals to an older crowd; as a comedian, she has widespread appeal; as an award-winning drag queen, she has a ferocious following among the young LGBTQ+ crowd. 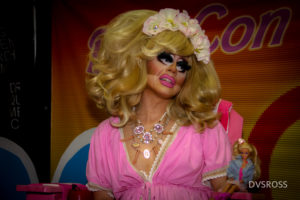 Born Brian Michael Firkus, Trixie is an American drag queen, folk star, and television personality. Hailing from Milwaukee, Wisconsin, Mattel competed in the seventh season of RuPaul’s Drag Race, finishing in sixth place. In 2018, she competed on the third season of RuPaul’s Drag Race All Stars, winning the overall competition. She has appeared in UNHhhh, a web series depicting the life of drag queens, and scored her own Viceland follow-up, The Trixie & Katya Show.

Mattel has toured around the world with her stand-up comedy show, and in 2017 began a lucrative career in Twitch streaming. She has toured the country with other Drag Race contestants and frequently performs in drag shows worldwide.

This resume is typical for a drag queen. Drag has a long history of creating performers of all mediums—singers, actors, musicians, and dancers. However, Trixie is forging a new path for drag stars; she has written and released two folk studio albums. The first, entitled Two Birds, was released in 2017; the second, called One Stone, came out earlier this year.

Mattel, who performs folk music as both Brian and Trixie, writes songs for her own development; she recently told NPR, “I’m looking for answers myself when I write this music. A lot of times, I’m not sure what I’m writing or what I’m asking until the song is done.” Critics and listeners have touted Mattel as an important gay icon in a strictly heteronormative genre, but Trixie does not see herself as a champion of gay inclusion: “My music is about being a human being. It’s not about gay relationships; it’s about relationships. It’s not about feeling like an outsider because you’re gay. Maybe it’s just feeling like an outsider.”